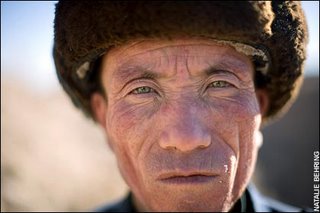 There was an interesting article in Saturday’s paper about supposed descendants of Roman soldiers living in China. The idea has apparently been around since the 1950s, and the theory goes that a bunch of Romans, fighting under Crassus in the Eastern half of the Roman empire, were captured by the Parthians and used by them as mercenaries, until they were captured by the Han Chinese and eventually settled in what is now the city of Liqian.

The theory is based partly upon a reference made by Pliny in Book VI of his Natural History:

Next comes the district of Margiana, remarkable for its sunny climate… This district is fifteen hundred stadia in circumference, but is rendered remarkably difficult of access by sandy deserts, which extend a distance of one hundred and twenty miles: it lies opposite to the country of Parthia, and in it Alexander founded the city of Alexandria. After this place had been destroyed by the barbarians, Antiochus, the son of Seleucus, rebuilt it on the same site as a Syrian city… giving it the name of Antiochia… It was to this place that Orodes conducted such of the Romans as had survived the defeat of Crassus.

[Margiana was in the east of modern day Turkmenistan; Parthia is pretty close to modern day Iran; Orodes was a king of Parthia]
Posted by Anonymous at 4:36 pm